What is Email Subject Line Generator?


How to use Writesonic's Email Subject Line Generator?


Get ready to generate a perfect email subject line:


STEP 1 - Go to the dashboard and click on “Email Subject Line.” 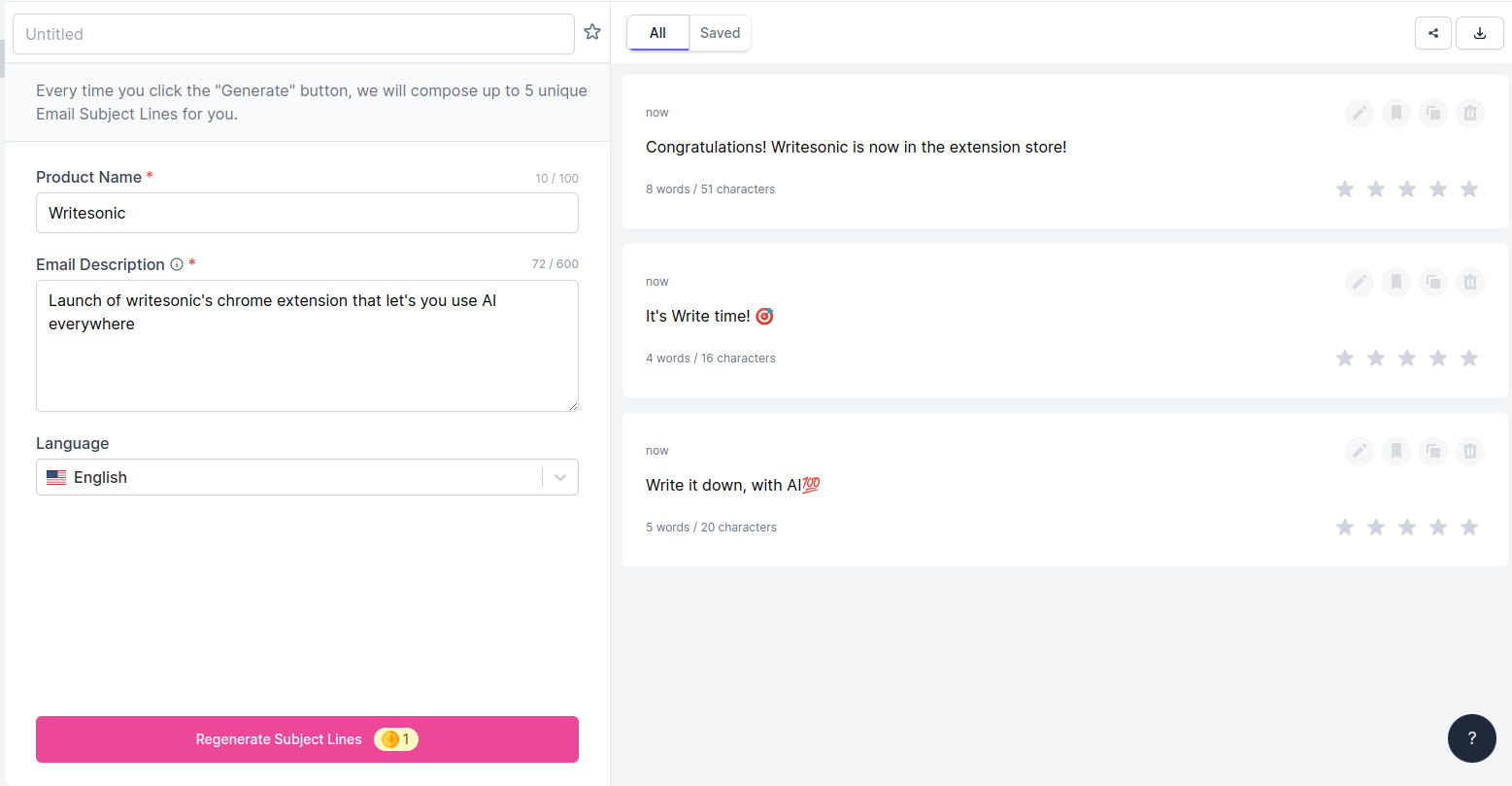 STEP 4 - In case you want more or something else, you can click on the “Re-generate” button.

Here are a couple of examples:

Input: Content marketing is a marketing strategy used to attract, engage, and retain an audience by creating and sharing relevant articles, videos, podcasts, and other media. This approach establishes expertise, promotes brand awareness, and keeps your business top of mind when it's time to buy what you sell.

Output 1: Using engaging content to build brand awareness and keep your customers engaged and interested is known as content marketing. Articles, videos, podcasts, and similar media are used to accomplish this.

Output 2: Creating and sharing relevant articles, videos, podcasts, and other media is how content marketing attracts, engages, and retains an audience. This approach establishes expertise, promotes brand awareness, and keeps your business top of mind when it's time to buy what you sell.

Input: Sushi is a Japanese dish of prepared vinegared rice, usually with some sugar and salt, accompanied by a variety of ingredients, such as seafood, often raw, and vegetables. Styles of sushi and its presentation vary widely, but the one key ingredient is "sushi rice," also referred to as shari or sumeshi. Wikipedia

Output 1: There's a wide variety of sushi styles and presentations; however, the fundamental ingredient is sushi rice, also known as sumeshi or shari. Sushi is a Japanese dish made with vinegar-treated rice, usually with salt and sugar, along with seafood and vegetables. Sushi rice is the key element. Because it includes a wide variety of ingredients, sushi can be served in many different ways. For example, nigiri sushi is a popular kind of sushi that features a ball of sushi rice topped with a bite of fresh fish, while maki sushi is sushi that is rolled up into a cylindrical shape.

Output 2: Sushi is a Japanese meal consisting of cooked rice seasoned with vinegar, salt, and sugar and accompanied by a range of ingredients such as seafood, which is often raw, or vegetables. Sushi is served in a variety of styles, but the key ingredient is 'sushi rice,' also known as 'sushi rice' or 'sushi rice.' It is a Wikipedia article.

Input: In AD 43, the Roman conquest of Britain began; the Romans maintained control of their province of Britannia until the early 5th century. The end of Roman rule in Britain facilitated the Anglo-Saxon settlement of Britain, which historians often regard as the origin of England and the English people.

Output 1: Between AD 43 and the early 5th century, the Romans established Britain as a province. The Anglo-Saxon settlement that marked the beginning of England and the English people is often credited with being the end of Roman rule.